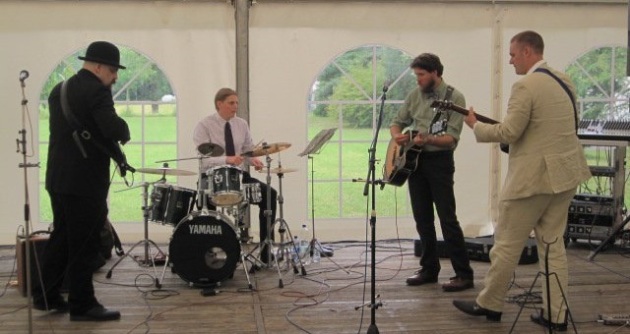 For a time – a depressingly brief time, when you add it up – we all lived together in Saskatoon, Saskatchewan, and formed the core of The Band Known As Sea Water Bliss. There’ve been other members, over the years.

I’m Michael – guitarist, singer, and website guy. Right now I’m living in the Vancouver area. Olin and Dean live in, respectively, Texas and Scotland. Andrew is the only one who’s stuck around Saskatoon.

It’s just you and me now, Scaly Joe.

After Olin and Dean left Canada in 2003, the band never did much except make low-budget music videos and play a coffeeshop gig every once in a while. But back in the day – back in the day, my friend – we were huge. Huge!

No, we were always tiny.

Well, we’re sort of flexible on that, but the idea is that “The Band Known As…” is an integral part of our name.

Y’see, the name comes from the title of a poem by my father, Roger Warner. And before you ask, no, my father’s not famous and neither is the poem. It’s just a title that stuck with me when I was a kid, and I somehow convinced the other guys it would make a good band name. It’s mostly been an inconvenience, to tell the truth.

You are correct, I also make silly internet cartoons, which you can find scattered throughout this website and at my blog The Michael A. Charles Online Presence.

If you’re really interested in the cartoons, you can read this interview I did with the JimH Crossword Blog about how I got into animation. But right now I’d prefer to talk about the band.

Q: Okay, so what does this so-called “band” of yours sound like?

Q: That answer doesn’t help at all. I don’t suppose you have any recordings I could listen to?

After playing music together for almost fifteen years, during which time we never recorded anything more sophisticated than lo-fi basement tapes, in 2006 we finally completed our self-titled debut CD. You can buy a digital copy through Amazon or various other sites if you have a grudge against Amazon.

If you’d like a physical CD, there are a few exorbitantly priced copies out there. Don’t bother with those. I’ve got a practically full box of unsold CDs sitting in a closet. Get in touch with me and we’ll work something out.

Q: Before I decide to buy your CD, I need to find out whether you can act. Are there any videos I could watch?

Yes! Over the years, with the help of some filmmaking friends, we made low-budget music videos for several of the songs on our album. You can watch those as well as a handful of live performances on the Songs page.

Q: What about this rock opera you’re always going on about? Any recordings of that?

Uh, no. But if you believe this extremely negative review in a local entertainment magazine, the songs were “sometimes reminiscent of the Eagles, sometimes of 10,000 Maniacs.” So that’s good, right? Just take that mean guy’s word for it.

You can read all about the rock opera on the 404 page.

Q: Who’s that fish-girl on the main page?

That attractive ocean creature is Marrina, reproduced (without permission) from the early-’80s Marvel comic book Alpha Flight. For another take on Marrina, by local artist Troy Mamer (who painted our album cover, above), visit our Album art page.