Troy Mamer designed the poster for the 2002 production of our rock opera, and did some illustrations for the 2003 version. He was our first and only choice to design the cover for our debut album.

Our first idea was that the cover should feature our unofficial mascot, Marrina, from the Marvel comic Alpha Flight. Troy Photoshopped together this image, which Andrew and I thought was awesome.

But when we showed it to our friends, they all said it was too dark and creepy. They said it looked like the cover of a heavy metal album. So after some discussion we decided to start again from scratch.

To start with, I should explain that the Maurice Sendak-inspired creatures on the cover of the album represent the members of the band. I’m the ring-tailed lemur playing the flugelhorn, Dean is the ostrich, Andrew is the satyr-like beast, and Olin – slightly out of step with the rest, appropriately enough – is the guy in the pink bunny suit. 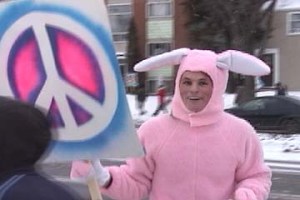 Here’s the very first sketch Troy made – Andrew as a Sendakian wild thing.

Here are three versions of Dean as a crazy-eyed ostrich.

Here’s Troy’s test painting of the album cover. Notice that bunny ears have been pencilled in over Olin’s original ram’s horns. The sketch at bottom (which vaguely resembles the sinister rabbit from Donny Darko) was Troy’s first attempt at a bunny-suited Olin.

Apart from Maurice Sendak’s Where the Wild Things Are, our other source of inspiration was John Huston’s version of Moby Dick. I thought it would be cool if I were Captain Ahab and Andrew were Queequeg. 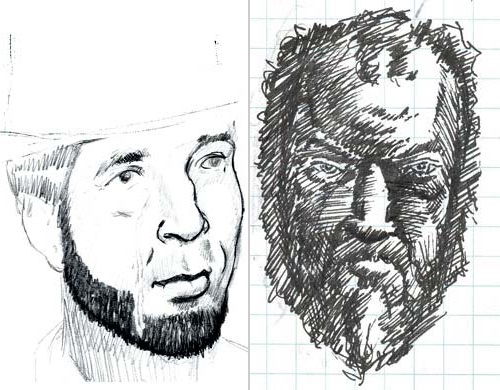 Here’s a sketch of Ahab with his telescope. I asked Troy to give me a nice big scar running down my cheek, just like Gregory Peck in the movie.

On the rear cover of the CD, we see Ahab and Queequeg heading for the island of the Wild Things.

When we open up the CD insert, we see Ahab and Queequeg back in harbour, showing off their trophy.